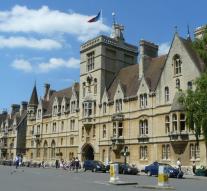 london - British universities open doors for graduates who have fled the civil war in Syria . The universities expect an exchange of ideas based on research and experience which is beneficial for all parties .

Islamic state in Syria has often targeted scholars, made life impossible. The council that helps academics to flee, Cara, is in contact with more than one hundred British universities to accommodate the displaced scientists and help them find work.

Two thirds of the 140 scientists who currently helps Cara are Syrians, some of whom already have found shelter in the oldest university, Oxford. The others are Iraqis.

Cara assumes that the graduates return to their home country if it is safe there.