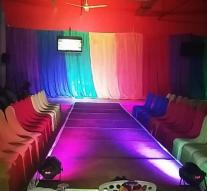 In Venom club in the capital Kampala, an election was held for the titles Mr., Mrs. and Transgender Pride Uganda. When police arrived, the doors of the club at closing, at least sixteen people were arrested and detained more than ninety people half hours.

Many visitors were beaten and humiliated, says HRW. Agents took photographs of those present, threatened to make them public, and according to eyewitnesses, many visitors were touched by the agents. A man jumped out of a window on the sixth floor to escape the police, and is in critical condition in a hospital.


Police said to be invaded because they had received reports of a same-sex marriage. The meeting was not reported, so which was illegal, police said. HRW speaks strongly against this.