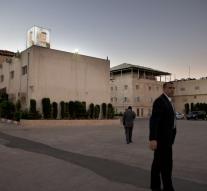 ramallah - With new clashes between Israeli soldiers and Palestinians Thursday killed two Palestinians. A man tried at a checkpoint near Nablus Israeli security forces to attack with a knife and was then shot dead, said a police spokeswoman.

Earlier on Thursday passed a 21-year-old man in a village west of Jerusalem. He was part of a group of youths who threw stones at soldiers. The man was hit in the head by a bullet. According to a military spokesman, the man was a threat to the soldiers.

Since early October, at least 100 Palestinians slain by violence and nearly 20 Israeli soldiers. The resurgence of violence is due to a dispute over rights of access and prayer on the Temple Mount.