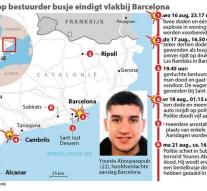 A suspect is a 28-year-old man from Nador, this man lived in Barcelona for 12 years. He would have welcomed the attacks on Facebook.

The second suspect was arrested in Oujda. He lives in Ripoll, home to a number of terrorist suspects from the attacks in Spain.

Read also: Terrorists were in Paris