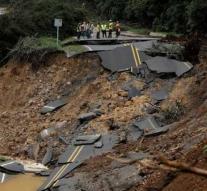 tegucigalpa - In Central America, 12 people died in recent days due to floods and landslides caused by heavy rainfall. The rain started Thursday and has not stopped since. Countries throughout Central America are plagued by the rain.

In Honduras, six people were killed and at least seven thousand people were evacuated. The first dead in that country were Thursday a mother with her two children who were sleeping while a landslide destroyed their house.