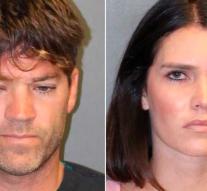 new york - An orthopedic surgeon and his girlfriend have drugged and sexually abused women.

That is in the indictment of Grant Robicheaux and Laura Riley. America knows the man of a dating show on television.

Once at their place they were stunned with drugs or maybe even anesthetics from the hospital where Grant worked, writes the New York Post.

Thousands of photos and videos of sex adventures were found on his phone. The police have been working for a long time to find out which women volunteered. According to public prosecutor Tony Rackauckas, many victims of the images look as if they were heavily clouded by drugs. Some were not even able to talk anymore.

A woman from Newport woke up after a night and filed a report. A forensic team found several drugs in the surgeon's home. Six guns and large quantities of ammunition were also found in him.

Grant Robicheaux became a well-known American when he participated in an online reality TV show about 'online dating rituals of the American man'.