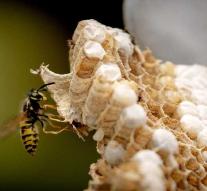 travel travels - A wasp has caused a kilometer-long traffic jam in the German state of Thuringia. The driver of a truck lost control over the wheel when he tried to drive the insect away, police say.

The truck then tipped on the A4 motorway near Gera. The 30-year-old driver was therefore slightly injured. The overturned vehicle blocked both lanes, resulting in a traffic jam of approximately 5 kilometers.

The wasp probably managed to fly out of the truck cabin unharmed, says a police spokesman.