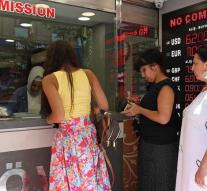 - Turkey has been in deep trouble. The Turkish lira dropped further against the dollar after rating agency Moody's warned of the worsening situation of the local banks.

In one go Moody's lowered his rating for twenty financial companies. This reduction means that it is even more difficult for these banks to borrow cheaply on the international market.

The lira fell 1.3% against the dollar in the morning trade. The currency will have lost 6% less in three days.

The interest that Turkey gives to buyers of its ten-year government bonds has risen to 20%.

In the background, the news was that Germany would consider supporting the Turkish economy with the EU to prevent further problems. Chancellor Merkel would have set up various initiatives in the run-up to an already planned meeting in September between Turkey and Germany.