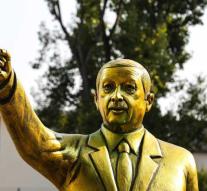 wiesbaden - The municipal authorities of the German Wiesbaden have removed the gold-colored image of the Turkish president Erdogan. Security could not be guaranteed around the image, part of an art event, the city said.

On Wednesday just after midnight, the fake Erdogan was therefore taken into the hoists by the fire brigade and removed, as was shown in photographs in the German Bild.

The image, about four meters high, was part of the art event Wiesbaden Biennale. That manifestation, which this year has as motto Bad News, is known for provoking.