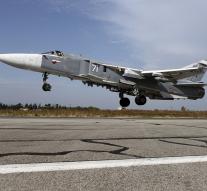 ankara - Turkey on Tuesday shot down a Russian Sukhoi Su- 24 bomber. That was something would go wrong between the two countries coming.

Turkey, a member of NATO, which has previously complained about Russian aircraft over its territory. Last October was in the Turkish capital Ankara still summit. The Russian Air Force was summoned about two incidents in which Russian warplanes violated Turkish airspace. This happened on October 3 and 4, to the anger of the Turkish government.

The Russian delegation headed by General Sergei Dronov assured his Turkish interlocutors at the time that measures have been taken to prevent new violations of the airspace, the Turkish military announced in a statement.

The air space violations were not the only incidents between the two countries. Between 3 and 10 October, there have been thirteen dangerous confrontations between Turkish and Russian aircraft. That said Turkish Deputy Foreign Minister Ali Kemal Aydin during a visit to Moscow. According to him, which were confrontations took place near the Turkish- Syrian border.