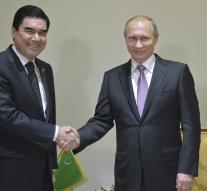 - The shooting down of a Russian fighter by Turkish F- 16s at the border between Turkey and Syria has to do not only with violations of Turkish airspace. There are also another great tensions between Turkey and Russia related to the war in Syria.

Ankara Russia had already threatened to take measures such as the bombing of Russian warplanes in Turkmen north of the port city of Latakia in Syria, near the border with Turkey, would continue. There are at least mostly killed dozens of Turkmen by the use of cluster bombs by the Russian fighter jets.

This is very bad blood in Turkey, which considers the Turkmens as her brothers. Ankara likes to jump before they step into the breach. A few thousand Turkmens fled to the southern Turkish province of Hatay.

Meanwhile circulating on Turkish social media photos of killed and seriously injured Turkmen children. Turks cry for vengeance and anger in the country against Russia increases. There live an estimated 1.5 million Turkmens in Syria. They are descendants of Turks who came there during the Ottoman Empire. They have always had problems with Syrian President Assad, who just helped by Russia.

Tomorrow the Russian Foreign Minister Lavrov to Ankara to discuss the situation in Syria. That visit was already planned.