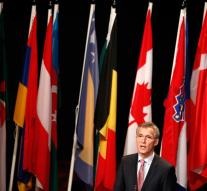 ankara - Turkey will consult with NATO and several individual countries about strengthening his defense because of the threat from Syria . The talks also comes the deployment of Patriot air defense systems discussed. That left the Turkish Ministry of Foreign Affairs Friday .

Netherlands was earlier one of the countries which are stationed at the request of Turkey Patriots in the border area of ​​Turkey with Syria. Earlier this year, the defense systems were brought back again . Other countries got those weapons back because the threat had diminished.