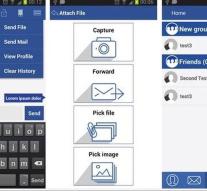 ankara - The Turkish authorities ordered the arrest of another hundred former police officers on Saturday. According to the press agency Anadolu, that again related to the failed coup more than a year ago. There are already 63 officers who have been scattered throughout the country.

Everyone is suspected of using ByLock, an app that can send encrypted messages. Ankara believes that the supporters of Fethullah Gülen, the spiritual who was behind the coup, would maintain contact with that encrypted channel. Gülen has been living in the US since 1999 and denies all allegations.