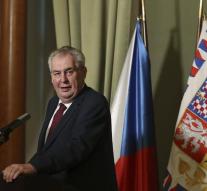 prague - The upcoming US presidential Donald Trump, the Czech President Milos Zeman invited to a telephone for a visit at the White House in Washington. That has provided a spokesman Zeman Tuesday.

Trump expressed his appreciation at the fact that Zeman as the only head of state in the European Union before the presidential elections in November publicly expressed its support to him. According to the spokesman Trump has an invitation to visit the Czech Republic Zeman adopted. He knows the country well, as his former wife Ivana comes from.

Zeman since March 2013 president. He is against Islam and has sharply criticized asylum in Germany.