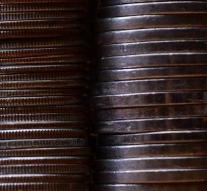 stuttgart - Justice in Germany persecutes two German treasure hunters who kept an important find of medieval coins against the rules secret. The two found a collection of more than 10,000 silver coins near the town of Ellwangen with the help of a metal detector.

Instead of reporting their discovery to the authorities as required within four days, the 22-year-old and 28-year-old treasure hunters kept their lips together and divided the treasure. Months later, one of the two still went to the authorities who called in the judiciary.

When the house was searched by the men, the authorities finally found the coins and also a bronze ring and a piece of ceramics, so justice announced on Wednesday. Conservation of the Land Baden-Württemberg speaks of an 'archaeological find of special scientific significance'.

The duo risk a high fine or three years in prison due to misappropriation.