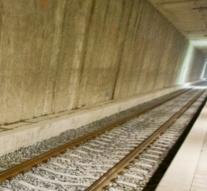 - A train in France is 19 kilometers at high speed on the stretch between Abancourt and Rouen in the northern department of Seine -Maritime driven without the driver could stop him. The incident happened after the train two cows had hit a speed of 140 kilometers per hour. This was reported by the French newspaper Le Figaro Thursday.

Found themselves aboard the train except for the train crew to seven passengers. No one was injured.

In the cabin appeared after the accident all electricity failed. This enabled the driver brakes or communicate with the railway station. He then tried the emergency brake, but which was not functioning well. According to the French railways SNCF is the first time something like this has happened. The engineer knew his own mobile phone to establish contact with the plant. Eventually the train by a ramp to a standstill.

A collision with animals is nothing unusual. That's in France thousands of times per year.