Home / World / Tourists on Kos will be afraid of the night 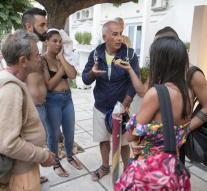 kos - Thousands of Dutch tourists on the Greek island of Kos meet again a scared night after the last night's earthquake, causing people to panic the streets in the tourist resort.

Some Dutch do not wait for the new aftershocks and have booked a premature return flight, often after paying hundreds of euros extra. They are angry at their travel organization because they do not receive compensation for the costs.

'There is no life threatening situation and fear is not a reason for early return, TUI's travel organization told us,' complains Veerle Bruinincx from Bergen op Zoom just after saying the new aftermath Saturday night, 'as a flashback of the Earthquake. 'Like other guests, she wants one thing: as soon as possible back to the Netherlands. Together with her girlfriend Diana Wiegeraad she has spent 200 euros for a return flight on Monday even though their holiday would take place on Kos until Thursday. 'We got the same chills as during the earthquake.'

For example, many Paritsa hotel guests sleep in the heart of Kos city, just like many holidaymakers elsewhere on the island outside or in the hotel lobby, for fear of a repetition of the earthquake (6.5) in the night of Thursday on Friday or The harsh aftershock of Saturday night (4. 4). This happened after the ordinary life on the holiday island seemed to resume and the damage to some old buildings in the center was cleared.

Ellen ten Bloemendal from Leidschendam says that the last aftershock felt less vigorously than the thunderstorm of Thursday evening, but she later takes a premature flight later in the evening. Her daughter Doris Kerkhoven is no longer excited about the tensions and wants to go home, even though they throw away ten paid holiday days. She is after a burnout of nerves, especially after the new vibration of the earth. 'Such a trauma does not really help her recover,' says her mother. This situation is further aggravated by the fact that one of the guests had fallen from a balcony during the turmoil and had to be taken seriously on the streets, to the dread of the dozens of hotel guests.

The additional cost of 300 euros per person is not reimbursed, says Ten Bloemendal, who was involved in the rescue operation after the earthquake in Haiti in 2010. 'I think it's really scandalous how TUI is dealing with this situation,' she says.