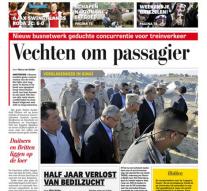 - Good morning! Today in the Sunday newspaper : trains run competition by making it a whole network of mostly luxury buses with electrical outlets and wi-fi.

http: // www. telegraph. com / telegraph-i Also: * The government, in particular VVD and PvdA, fails at the shelter problem, says D66. * KLM wants airconditioning in stationary devices, so waiting passengers are not sick with anxiety. * The Drenthe shepherds jump up in the air because sheep are now on the national heritage list. * Black Peter shines on cartoon expo. * Photo gallery: Creepy lovely- Halloween. * Report: Anarchy in Dutch Crown: people living half a year without the 'patronizing' municipal provision. * Aviation Expert warns people not to join a Russian charter plane, after the disaster of Saturday. The Kurdistan party HDP is likely to again be decisive for the Turkish elections. * In Telesport: Ajax travels next week as leader to De Kuip by beating Roda JC (6-0) at Excelsior Vitesse made no mistake (0-3) PSV arrested three hard-fought points in riveting goal fest against De Graafschap (3-6), the brutal intervention of Ron Jans on the misbehavior of Sheraldo Becker and Lars Veldwijk cost PEC Zwolle head in Groningen (2-0), after 23 years of Formula 1 returns to Mexico, Jorien ter Mors said yesterday at the selection trials for the first World Cups in Enschede with the fastest time of the day (38.75). Have a nice Sunday!