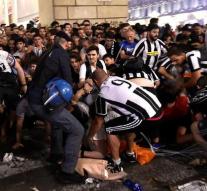 turin - Of the thousands of football fans who were injured on San Carlo in Turin on Saturday, there are still three in critical condition.

Two women are suffering from severe injuries in the hospital. A boy of 7 is artificially in coma.

The victims ran under the Champions League final between Real Madrid and Juventus. It is still unclear how exactly the hysteria originated.