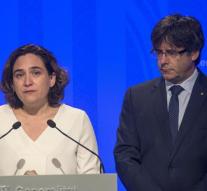 barcelona - The Catalan government announced Thursday's official three-day mourning trial due to the terrorist attack on the Ramblas. The mayor of Barcelona Ada Calau called everyone on Friday at 12.00 to observe a minute's silence to commemorate the victims. 'It is about showing that we are not afraid and unanimous in the fight against barbarity and for democracy,' she said.

This weekend it will be a minute in the stadiums before the start of the matches in the Spanish football competition. It concerns the competitions of the Spanish Primera Division and the three divisions below (Segunda A, Segunda B and Tercera Division). The players of FC Barcelona will wear a black mourning band.