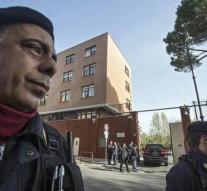 cairo - In Cairo three police officers have been killed by militants. Five other agents were injured by the shooting, according to the Ministry of Interior. They were taken from a car under fire.

In the northern part of Sinai, fighting for Islamic violence, attacks on police and military are more common. However, in Cairo it is rare.

The responsibility for the assessment has not yet been claimed.