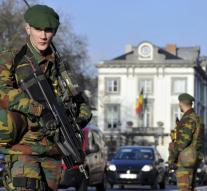 brussels - The threat level for asylum centers in Belgium is increased from one to two. That is because of the increased violence against refugees in neighboring countries like the Netherlands and Germany.

Terror Level two means the threat is 'average'. There is increased vigilance around the reception centers. The police will patrol targeted, while the centers to pass at least four hours, the newspaper said.

There are no concrete indications that the centers in Belgium to be taken on the grain, but the anti-terror body OCAD says rather act as a precaution. Attention is drawn to the violence against asylum seekers in Germany, for example. The police last week foiled an extreme right-wing attack on two refugee centers in Bavaria. The suspects wanted to strike with guns, knives and explosives. In our country recently became the reception center for refugees in Woerden stormed.