Home / World / Thousands of Russians fighting for IS 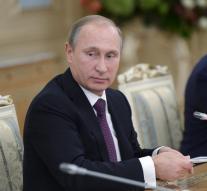 astana - Between 5000 and 7000 Russians and citizens of former Soviet states fight alongside Islamic state in Syria . That Russian President Vladimir Putin said in the Kazakh capital Astana where he is for a summit with ex - Soviet states.

People who have traveled to fight with IS , do not need it to count on them to come back , said Putin.

The Russian air force attacked targets in Syria since late September of IS. This is progress , Putin said. He says to have made ​​contact with Saudi Arabia, the United Arab Emirates, Egypt , Jordan and Israel to discuss a joint approach to the IS- terror .