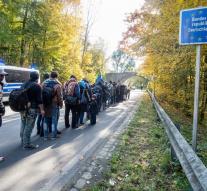 In the small border town of Wegscheid, not far from Passau, arrived in the early evening in 2000 migrants. " We could not prepare for it ", said the police spokesman. Austrian authorities had been no warning.

Police took half of the 2,000 newcomers to Ruhstorf, the other half is located in Passau. Tuesday will these refugees to other shelter facilities in Germany.