Home / World / Thousands of Czechs are protesting against government 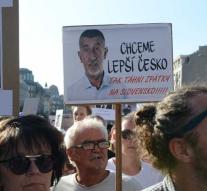 prague - Thousands of Czechs took to the streets Tuesday night to protest against Prime Minister and multi-billionaire Andris Babis and his intended government. 'Shame, disgrace', the demonstrators who had gathered at Wenceslas Square in the center of Prague called.

The leader of the populist ANO movement wants to form a coalition with the social democrats. The criticism, however, focuses mainly on the tolerance of the Communist Party (KSCM) that is necessary for a workable majority. That is precisely seventy years after the takeover by the Communists in the former Czechoslovakia and more than 28 years after the democratic revolution, explained the organization of the demonstration. A petition against the proposed construction has already been signed by a quarter of a million people.

President Milos Zeman will swear in Babis for the second time on Wednesday. In January he lost the confidence of the parliament. This was mainly due to the criminal investigation that the 63-year old ANO founder set up for misuse of subsidies. The accusation that he ever collaborated with the Communist secret service rejects Babis.