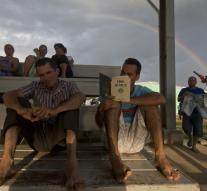 - Almost 3200 refugees from socialist Cuba stranded in Costa Rica. Now neighboring Nicaragua has closed its borders, the Cubans can their planned trip through Central America to not continue with the United States. The number of migrants is increasing by the day, said an official of the Immigration Department in Costa Rica Tuesday.

In recent weeks, a growing number of Cubans leaving their country to go to the United States. Now Washington and Havana continues to normalize their relations, they apparently fear that it will soon no longer will be so easy as before to obtain a residence permit for the USA. The foreign ministers from the region will take place during a meeting in El Salvador a way out of the crisis.