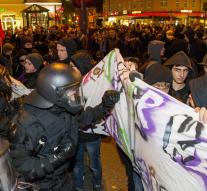 dresden - Thousands of people Monday in Dresden Munich participated in protests against anti-Islam movement Pegida. In Dresden 5000 people followed the call of the movement ' heart instead of hate, " in Munich in 3000 went Pegida opponents to the streets.

Pegida himself had mobilized in Dresden with at least 6 000 protesters, just less than a week earlier when there were 8000. Pegida frontman Lutz Bachmann had to march on the participants insisted quietly, referring to the anniversary of Kristallnacht in 1938.

In both cities was relying on the anniversary of Kristallnacht ban Pegida demonstrations demanded. But burgemester Dresden saw no legal grounds for this. In Munich, the court dismissed a requested ban.

In the so-called Kristallnacht on 9 November 10, 1938 the Nazis burned synagogues, beat and murdered Jews and demolishing their shops and homes.