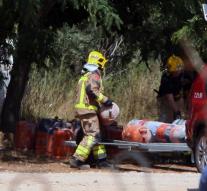 barcelona - The Spanish police found the remains of a third person in the detached house in Alcanar where the terrorists prepared the attacks in Barcelona and Cambrils. That reports several Spanish media on Sunday.

In the house in Alcanar a heavy explosion occurred on Wednesday. More than one hundred gas bottles were found which, according to the police, were intended for an even greater terrorist attack. In the preparations, however, it went wrong, causing the terrorists to move on to 'plan B'.

Previously, the police in the house had already found the remains of two other people. One of them may be an imam from the village of Ripoll, where some of the terrorists lived. Meanwhile there is still no trace of the 22-year-old Moroccan Younes Abouyaaqoub.