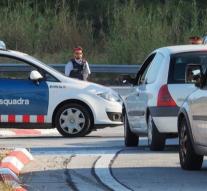 barcelona - The strict border controls between Spain and France due to the attacks in Barcelona and Cambrils also led to tens of kilometers of files on Saturday.

By far the longest file is between Barcelona and Perpignan (A9): 22 kilometers of file with hourly delays as a result, reports the Traffic Information Service. Also at local border crossings in the Pyrenees, according to the VID long files.

On Friday, the traffic services already warned that Dutch holidaymakers returning from Spain should take long waiting times. During enhanced border controls, all cars are checked one by one.