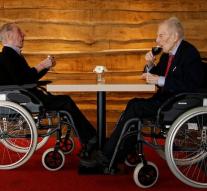 gent - The Belgian twins Peter and Paul Long Rock celebrates Friday with a glass of red French wine his 103rd birthday. The men of Ghent are the world's oldest twins. They need two more years to unseat the American record holders and Glen Dale Moyer, which took 105 years.

Peter and Paul are actually more than a century virtually inseparable. Neither of them was ever married. They do not have children and grandchildren, they feel pity. They call themselves each other's best friend and share today a room at the nursing home where they live.

During their working life, they had the same job: magistrate in court. They still go through life tiptop dressed and speaking rather elegant French than Dutch. They call themselves consistently,, Pierre et Paul. '