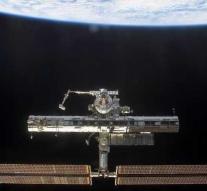 houston - Space station ISS is struggling with a small hole in the wall. As a result, the pressure on board Thursday has dropped a little. The 2 millimeter hole has been sealed with masking tape. The situation on board is under control. The hole was possibly caused by a collision with space debris or grit.

The hole was in a Russian part of the space station, the so-called Rassvet module. That is the place where capsules coming from the earth are connected. Now there is the vessel with which a German, an American and a Russian arrived at the ISS in June. It is not yet known whether the leak will affect their planned return by the end of this year.

The ISS flies through the vacuum, about 400 kilometers above the surface of the earth.