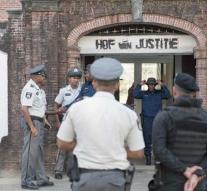 paramaribo - The two Surinamese Dutchmen arrested in Suriname on suspicion of terrorism remain temporarily arrested. Surinamese media reported Friday that the Judge-Commissioner decided. Just about the exact suspicion of the two, Justice has hardly left anything.

The men are suspected of 'acts of terrorism', the newspaper De Ware Tijd quoted the Public Prosecutor. Due to the 'sensitivity of the investigation', the judiciary does not yet give details.

According to the Surinamese press, the brothers worked in the Islamic slaughterhouse of their father in the center of Paramaribo. The True Time reported earlier that there were indications that the men were on the Internet in recruiting new warriors for the terrorist movement of Islamic State. That is not officially confirmed.