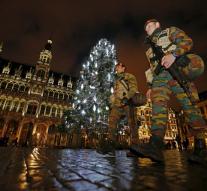 " We fear an attack like in Paris ", said Michel. According to him, shops and public transport possible targets of terrorists.