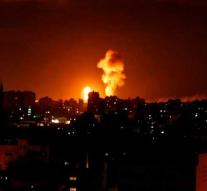 jerusalem - From the Gaza Strip, at least ten and possibly twelve missiles were fired to the south of Israel on Friday night. An army spokesman told the newspaper Haaretz that most projectiles were intercepted by the Israeli defense system Iron Dome.

In villages near the border and in the city of Sderot, the air alarm went off several times. Residents reported having heard explosions, in some cases they were in the air. There are no reports of victims or damage. Safety units are still looking for any wounded and the shot grenades.

Media in Gaza said that Israel has targeted targets in the vicinity of Rafah in retaliation.