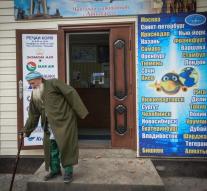 dushanbe - The Central Asian country of Tajikistan will punish journalists who use difficult words. Many articles state sometimes ten words 'simple' readers do not know, complain to the authorities of the State which is guided by a firm hand. They speak of a gross violation of the official language rules.

Journalists must take into account future fines converted to 180 euros if they violate the standards. A special committee will napluizen texts in incomprehensible terms. But also television and radio in the former Soviet republic of foreign words should be used more.