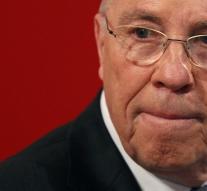 bern - The Swiss parliament on Wednesday elected a new cabinet. The big winner of the elections, the conservative Swiss People's Party (SVP), won two of the seven ministerial posts in the so-called Federal Council. That there is a more than up to now.

In the parliamentary elections in mid- October the SVP 29.4 percent of voters behind them, the best result in the history of the party. The populist party leader Christoph Blocher gets into the cabinet accompanied by his party colleague Guy Parmelin. It is expected the Government will work towards a tightening of the rules on asylum in Switzerland and also limit the immigration of citizens of the European Union.

The seven ministers are from the four largest parties in parliament.