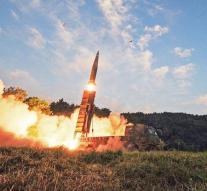 bern - Switzerland has offered its good services to help solve the crisis in North Korea. The neutral Alpenland is willing to mediate and hosts as a host at ministerial level.

President Doris Leuthard pointed out that Swiss soldiers were drawn up in the demarcation zone between North and South Korea. The country also has a long standing position in the field of neutral diplomacy.

'We offer ourselves as a mediator. It's really time to go around the table, 'said Leuthard. But the great powers of China and the United States must take their responsibility, she added.

North Korean rocket and nuclear bombs have tended to increase tensions around the Korean peninsula recently.