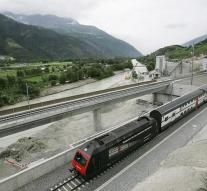 zurich - The Swiss Railways (SBB) will allow driving without driver trains. It is a test that fits into the ongoing digitization, which many projects are in the pipeline. That said CEO Andreas Meyer Monday during a presentation in Zurich. He thinks with more efficient techniques to increase the capacity of the rail network by 30 percent.

'The railway technology of the future is from 2025 the deployment of more trains possible, resulting in a fuller schedule, less interference and better radio and accurate passenger information,' said Meyer. SBB is working on the development of a digital signal box, wants escalators, lifts and the light on the go control remote stations and customers for freight to keep abreast of, inter alia, temperature and shaking the wagons when it matters is for the load.

In Switzerland there is a rail network of approximately 3,000 kilometers, partly in difficult mountainous terrain. According to SBB it is now nowhere in the world so heavily used.

In the Netherlands, the province of Groningen has announced an experiment with trains without drivers.