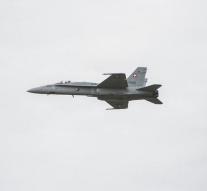 zurich - An F-18 of the Swiss Air Force which had been missing since Monday, is located. The jet crashed found in the mountainous area around the Sustenpass, the military announced.

The observation was made by a helicopter. The pilot has not been found yet. Because of the wind helicopters have no rescuers would settle on the difficult terrain.

The device was Monday at the end of the afternoon above the small town Susten disappeared. Searches were initially hampered by darkness and Tuesday morning by the weather.


In 2013, collapsed the same type of jet fighter of the Swiss air force down. Earlier this year plunged an F-5 with a stunt team of the Swiss Air Force down in Friesland, in the village of Beetgum. The stunt team was in the Netherlands for a demonstration flight during the Air Force Days.