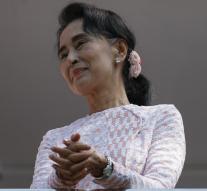 rangoon - The party of opposition leader Aung San Suu Kyi in Myanmar obtained an absolute majority in parliament. That is what the electoral commission announced Friday. Earlier on Friday said the National League for Democracy (NLD), Suu Kyi was on two seats of the majority. A quarter of the seats in parliament are reserved for the military rulers.

It was clear already that the NLD has won a great victory in parliamentary elections last Sunday. The current president of the country's Suu Kyi congratulations on the victory. Sunday's elections were the first free elections in Myanmar in 25 years.