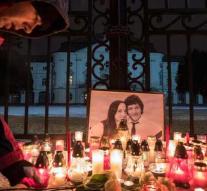 prague - The Slovak authorities released all seven suspects who were detained for involvement in the murder of investigative journalist Jan Kuciak and his girlfriend Martina Kusnirova.

The Slovak police held the seven Thursday in the investigation into the murders. Kuciak and his girlfriend were found dead last weekend in their home in Velka Maca, a village in the west of the country.

'During the statutory period of 48 hours we (the police) have looked for facts that are necessary for indictment. After those 48 hours we have released the persons '', according to a police spokesman in a statement.

Kuciak wrote about political scheming and profit. In his research, he may have encountered bands of mafia fans with Slovakian politicians and government officials. His unfinished story has been published in a number of Slovak and international media. One of the persons mentioned in that article had in the past ties with employees of Prime Minister Robert Fico's office.

On Friday evening, tens of thousands of Slovaks took part in meetings in memory of the investigative journalist and his partner. At the commemoration in Bratislava, the Slovak president Andrej Kiska was present.