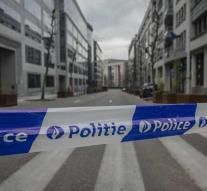 kortrijk - The Belgian police have arrested a suspect of the double murder in a student house in Kortrijk. The parquet of West Flanders announced that the man is from Iran. Belgian media initially reported that it was an Afghan who rivaled 'rivalry'. acted.

One of the victims is an eighteen-year-old Afghan. He was stabbed to death with a twenty-year-old Russian. The two were not students but lived in the house through social work.

A cleaner found the unconscious man in the elevator early Monday morning. Emergency services could no longer save the victim. Later the lifeless woman was discovered on the third floor.

The suspect, who lives in another student house in Kortrijk, was injured and was arrested when he wanted to be treated.