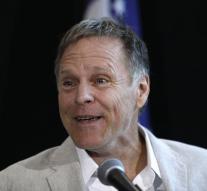 cincinnati - According to his father, American student Otto Warmbier (22), who stuck in North Korea, who returned from this country this week, has suffered 'severe brain injury by torture.'

Warmbier, arrested in February 2016, is suffering from botulism according to the North Korean authorities. The student's father does not believe that explanation and said Thursday at a press conference that his son was 'seriously maltreated.' '

Otto Warmbier is in a coma in a hospital in the city of Cincinnati. His condition is described by doctors as 'critical but stable. '