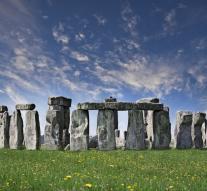 london - The 5000 year old Stonehenge is partly built with stones that had been used before. Scientists claim after thorough research that the so-called blue stones, the smaller of the monument had already been used for a monument elsewhere.

In the journal Antiquity, the researchers write that they found that the blue stones come from two mines in Wales. But they also discovered that the stones in places long before Stonehenge was created literally out of the grooves were removed.

One of the researchers, Professor Mike Parker of the British Institute of Archaelogy, believes that the first stones were used in the vicinity of the sites, over 200 kilometers away from Stonehenge. The large stones of Stonehenge weigh up to 25 tons, the smaller of the grooves of Carn Goedog and Craig Rhos-y- Felin in Wales 'only' two tonnes, or 2,000 kilograms.

Stonehenge is the place Amesbury in Wiltshire.