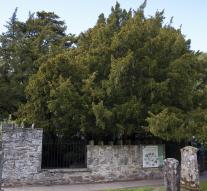 - An estimated 5,000 year old yew tree in Scotland appears no longer only masculine but also will attract female. The yew in Fortingall, the oldest tree in Britain, always produced only pollen and was thus seen as a male tree. But this year the yew suddenly also contributed three ripe berries, making the tree in any case partly female appears to have become.

Yet botanists not entirely surprised. " As strange as it seems, yews and other conifers of sex change ", Max Coleman said of the Royal Botanic Gardens in Edinburgh at The Independent. " That normally happens in the crown of the tree, but the yew in Fortingall, it seems that one branch is now behaving feminine. "

The ancient yew stands in the church of the village of Fortingall and is probably one of the oldest trees in Europe. The area was probably inhabited during the Iron Age, where the tree was the center.