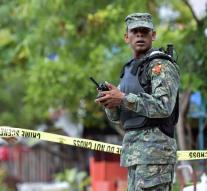 male - The state of emergency in the Maldives was lifted after a week. According to the Ministry of Foreign Affairs of the island nation in the Indian Ocean, "the security situation has improved." Initially the authorities had reported that the state of emergency would be in force thirty days after explosives were found near the residence of President Abdulla Yameen.

There would be talk of terrorist threats and a plot to murder the president. On his speedboat occurred in late September for an explosion. The president came with a fright, but his wife was injured. A short time later the vice president was arrested on suspicion of involvement.

With the imposition of emergency rule were security forces extra powers. A planned protest by opposition party MDP fell into the water. The leader of that party, former President Mohamed Nasheed, since March, sitting in prison. He was sentenced to thirteen years in prison on the basis of anti-terror legislation.

In the Maldives live more than 340 000 people, slightly more than in the city of Utrecht.