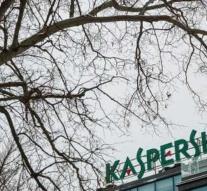 milan - Cyber ​​security guard Kaspersky has discovered new espionage software. It affects devices with the Android operating system. The spyware has been given the name Skygofree. He can listen to unsuspecting people through the microphone and record conversations.

He can also read along with chats in WhatsApp, read the memory, see where someone is and see the agenda. In addition, he can ensure that the device connects to a Wi-Fi network that is in the hands of cyber criminals.

Kaspersky calls Skygofree 'one of the strongest spy software weapons we've ever seen for Android. 'The malicious software was created in 2014 and has since been constantly improved. The most recent version is from the end of last year. The victims are mainly in Italy. They become infected when they are sent to a fake login page of Vodafone, for example.

Kaspersky thinks the software is made by an Italian IT company that deals with espionage.

It is not known whether it concerns HackingTeam. That company from Milan makes espionage software for governments. That company was hacked a few years ago. The perpetrators brought out an enormous amount of internal e-mails and source codes. HackingTeam appeared to do business with the authorities in countries like Saudi Arabia, Egypt, Turkey and Sudan. The theft also made it clear which holes in popular programs HackingTeam had found.