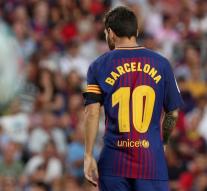 barcelona - The Barcelona match against Real Betis started with a minute silence. #Totssombarcelona was on the signs at the commemorative, Spanish for 'We are all Barcelona.' Messi and theirs do not play with their names on the back of their shirt, on all shirts is 'Barcelona.'

'We are not scared' the thousands of football fans scanned shortly before the fluctuation signal.

There was a lot of police on the go, even more than in a Champions League duel. The police checked several cars on their way to the game. She asked passengers to do the interior lighting so that the controls could be carried out quickly.