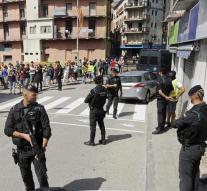 barcelona - The Spanish police searched the house of an Imam on Saturday morning in the municipality of Ripoll north of Barcelona.

DNA traces have been searched, reported the newspaper El Pais based on police sources. The police suspect that one of the two bodies found in a house in Alcanar, which may be muslim-like.

The terrorist cell would, according to the police, have planned the attacks on the Ramblas in Barcelona and the despised attack in Cambrils in the house. A large explosion occurred on Wednesday in Alcanar's house.

The police announced Saturday, 'several controlled explosions' in Alcanar, adding that the population does not have to worry about it. The house was heavily damaged on Wednesday by exploded gas cylinders.