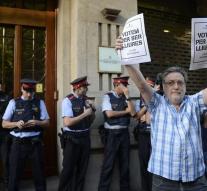 barcelona - The Spanish police arrested a senior civil servant in Catalonia on Wednesday morning for actions against the organization of a referendum on independence. Spanish media reported that the second man of the Catalan Ministry of Economic Affairs, Josep María Jové, was arrested on an invasion.

According to local media, several premises of the regional government have been invaded. Separatist politicians want to hold a referendum on independence of the region on October 1. According to Madrid, this is contrary to the constitution and the ballot can not take place.